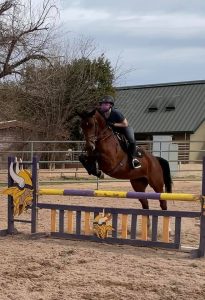 It’s been seventeen months since I have last shown. Between school, vacation, a pandemic, Essie’s leg injury, and my broken foot there just never seemed to be a convenient jumping show to go to. But there was finally a rated-show at a low-key local venue that would help put us back on top of our game. Three days of pure adrenalin, nerves, and corndogs, plus two days of trainers getting our barn’s horses into shape. Who wouldn’t be thrilled at the multi-colored jumps and flowers and ribbons? The first day was amazing, placing second in a class of over twenty riders and being pumped to move to the next level. The second day was met with disqualification and last place. Though I had no control of the saddle slipping down Essie’s side halfway over a jump, causing me to oh-so-gracefully slide off, I was pissed because the round was going well. I looked forward to our last show day, when clearly the two of us would have our shit together. On the final day, Essie could not get over the second jump which led to another disqualification. Though these were disappointing experiences, I had to remind myself that this was the first show back and that the entire show was basically ten minutes of my life that did not define my future. I could not be upset at my horse; who up until a week ago was mentally checked out of competition, and I could not be too harsh on myself because life has to move on, and progress is only made with failure.