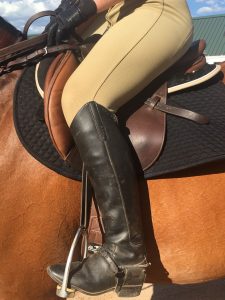 I didn’t ride for seven weeks while I was on vacation. My first ride after I returned I realized two things 1) my horse was fat and 2) my leg muscles suddenly no longer existed. In lessons with the assistant trainer (AT) I attempted to do as much pole and no stirrup work as possible because the head trainer (HT) had scheduled me for a lesson later in the week and I worried she would use me as a teaching opportunity for other riders: ‘Wow, here’s a prime example of what picking vacation over riding looks like,’ and I was not going to let that happen. To top everything off, the AT said she had ‘ridden’ my baby, but based on baby’s weight gain and stiffness I doubted it. I’m not saying horses cannot have pasture-time or vacations, too, I was just observing that her girth size was bigger, hell, even I needed to hit the gym. The AT was new to our barn and testing the waters about what my horse and I could do during our lessons so I helped steer the training toward getting my baby to soften into my hands and use her hind legs. I also practiced strengthening my inner calf muscles instead of relying on the handy-dandy spurs by doing a ton of leg yields, quarter line tracks, no-stirrup cantering, and single-stirrup trotting. I had forgotten how horrible single-stirrup trotting was (for everyone who has not done this or does not know what this is, basically you post while having only one leg at a time out of the stirrups). It feels like your whole calf is on fire. It is probably the most annoying exercises but it gets the job done very quickly.

I was anxious. I had less than a week to prepare. My anxiety churned my stomach and made me skip breakfast. It made me cough until I felt like I was going to through-up. I had such bad anxiety I could barely sleep the night before my lesson with HT. I knew I had to get up at 5 am and was worried I would not be able to sleep and because of that stress I did not sleep. I was worried that I would get yelled at as HT knew exactly where to poke the stick to make her comments hurt. She also has a great pair of lungs so the entire barn can hear her. I was terrified I would be told that “you look like a beginner”, “you’re lying to your horse”, or worse “you look like a rag-doll on top of the horse.”

I needed to strengthen my core and posture. Round and round the ring I put my legs down and focused on connecting my inner calf to my horse’s side, as if there was no way of telling where my leg ended and her body began. I posted up and down, up and down, with one leg in the stirrup and then switching directions and legs and doing that over and over again. I wanted to make sure that I was not going to be yelled at, I wanted to have a good lesson with HT. I went back and forth between no stirrup cantering and siting-trot leg yields. Over and over and over.

I had an amazing lesson. My baby got a lot of complements and so did I during the warm up  but the best part was when HT said “you do not look like you went away for the entire summer” at the end of my lesson and that made my calf pain worth it.